Medicare Open Enrollment: Are You Ready for the Surge? 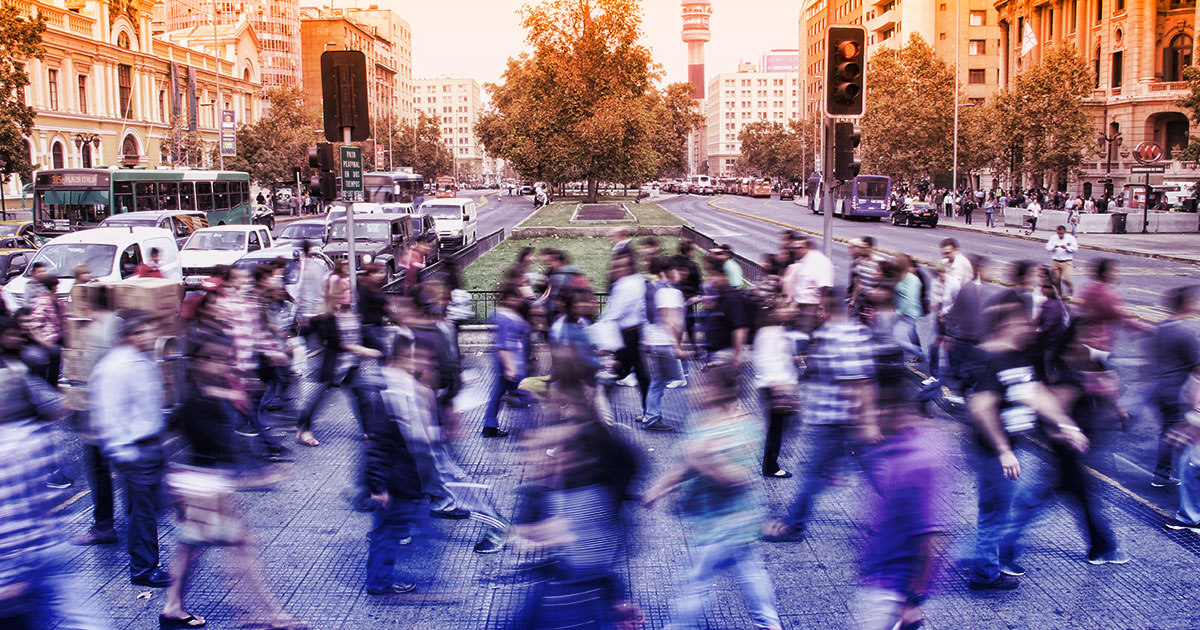 Some say that if there was no such thing as a "last minute," nothing would ever get done. And, so far, we haven't seen much that refutes that. Every year, Medicare Open Enrollment begins on October 15th, but that doesn't exactly mean patients are lining up outside the door that day. In fact, you may not get your first patient asking for help until a few days (or even weeks) into the enrollment period. But that doesn't mean you shouldn't be ready. 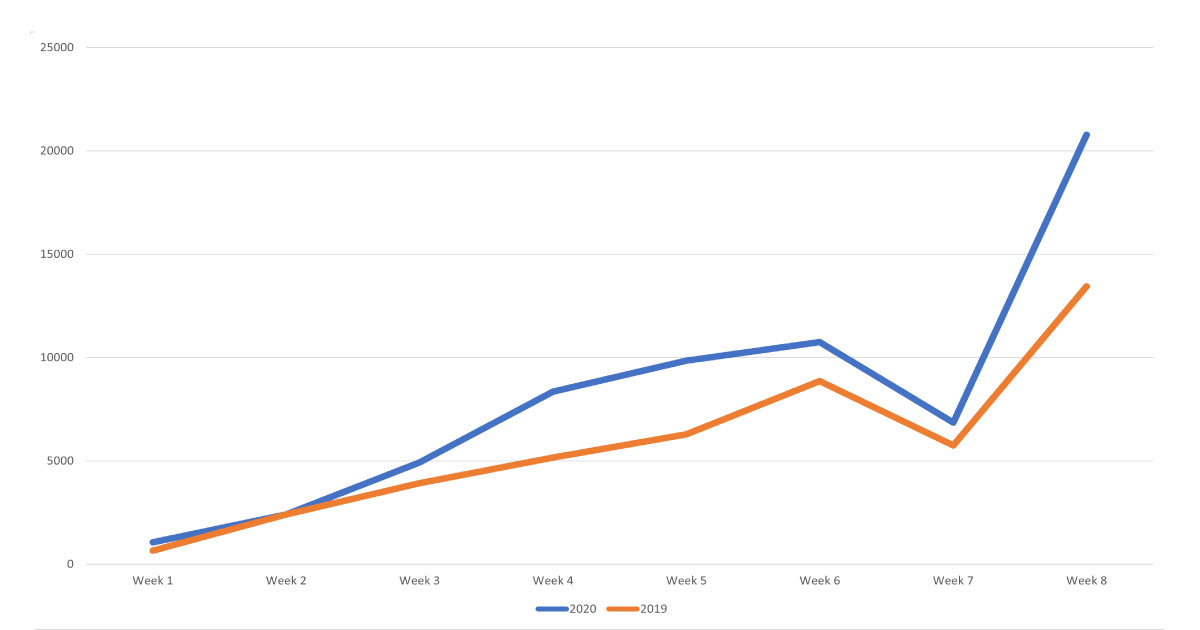 The graph above shows Medicare enrollments per week at the thousands of pharmacies using FDS Amplicare's Match plan comparison solution. With data from both 2019 and 2020, it's easy to see a pattern here. So let's take a look.

When Open Enrollment starts, there is generally some interest, but not too much. You'll get a few early birds through the door who want to take care of it as soon as possible, but most people know they have plenty of time to make a decision. However, it doesn't hurt to remind your Medicare patients about the Open Enrollment period and ask if they've started the selection process for the following year. 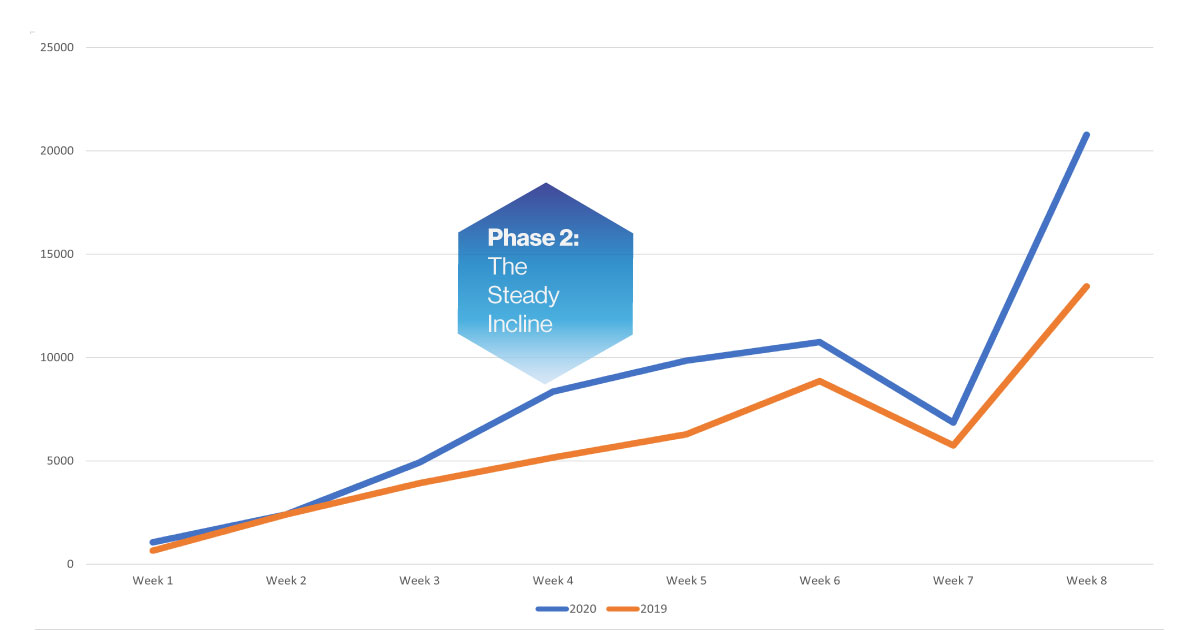 A couple weeks in, interest is starting to pick up, but it's still a slow and steady rise. More of your patients might be asking for advice with choosing a health plan. If you have a plan comparison solution like Match, you can do more than just offer advice; you can save them hours of headaches and find plans that benefit both of you. (Most patients like their pharmacies; if you explain that certain plans will put your pharmacy out of network, that's all many of them will need to hear.)

Predictably, enrollments take a dip right around the holiday. Everyone is cooking, eating, and enjoying family time. No one really wants to be focused on choosing a health plan right now. However, once the Thanksgiving holiday is over, that leaves a little over a week before Open Enrollment ends. And you know what that means. 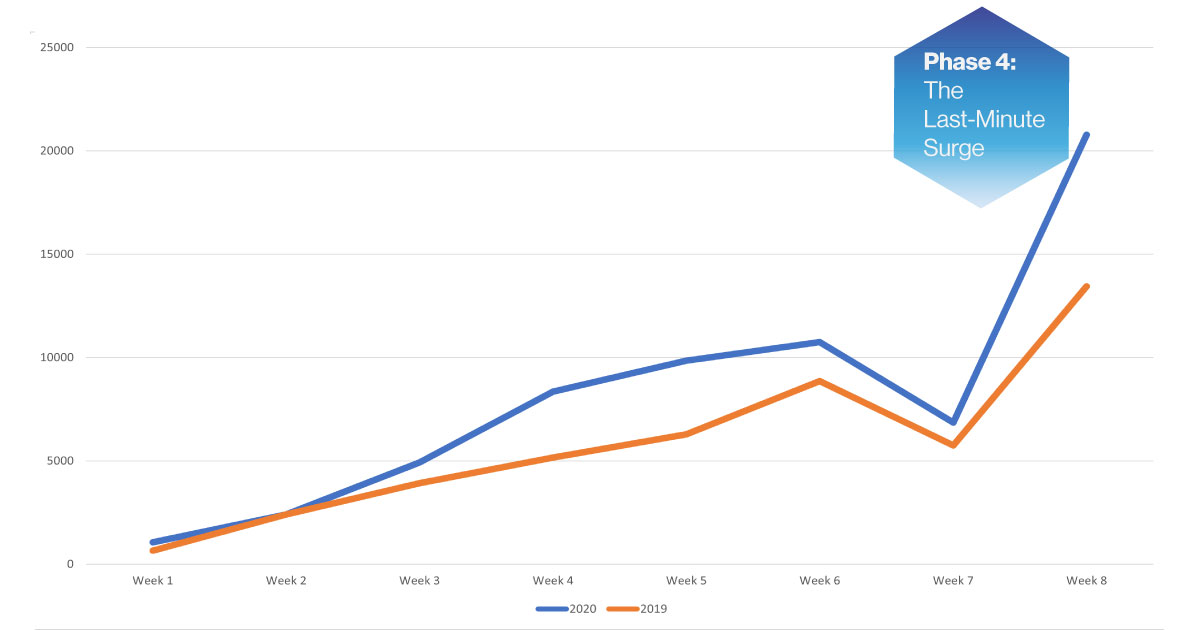 The fabled "last minute" has arrived. Patients only have a matter of days before the end of Open Enrollment and the end of their chance to make changes to their health plan for the following year. Historically, this is when the greatest number of Medicare enrollments happen as patients scramble to make changes before the deadline.

This will also be when your pharmacy sees the most requests for help from your Medicare patients. They'll want to know which plan is a better fit for their medications, and which plan will let them keep their doctor and you, their pharmacist. And the two of you could spend hours navigating Medicare.gov for that information... or you could turn to a proven Medicare plan comparison tool like Match to speed up and simplify the process.

The surge is coming. As the deadline approaches, more and more patients will want to make changes to their Medicare plans. Judging from the graph, if you don't have a plan comparison solution in place and ready to go by Thanksgiving, you've missed the boat. And when that wave of enrollments comes, you'll really, really wish you had a boat.

So don't miss the boat. Learn more about what Match can do for your pharmacy!

New Medicare Special Enrollment Periods and What You Can Do

Beginning in 2019, there will be a new Open Enrollment Period for Medicare Advantage. This period will run from January 1 – March 31. If any of your...

Tools to Improve the Patient Experience During Medicare Open Enrollment

Medicare Open Enrollment is an incredibly busy time for pharmacies. These Amplicare tools can help ensure a seamless experience for patients and...

Are You Ready for the Second Half of Open Enrollment?